[Pre-Order Now!] Searching for the Language of a House: Architectural Photography of Koji Taki

We are glad to announce that our first publication "Searching for the Language of a House Architectural Photography of Koji Taki" will be out very soon. Now you can pre-order this book directly by House of Architecture!!
・
This book of Taki Koji’s architectural photography includes 124 photographs of 17 houses taken from 1968 to 1979. Among these images, more than half of them have never been published before. The subjects of the photographs are works by architects such as Kazuo Shinohara (1925-2006), Kazunari Sakamoto (1943-), Toyo Ito (1941-) and Hironori Shirasawa (1943-). The photographs in this book have been digitized from original prints and film that each architect had obtained from Taki. The photographs are arranged in the chronological order of each building’s completion date. Taki’s shooting position and direction are plotted by editor of this book, artist Tamami Iinuma, on the architecture plans of the 17 houses, which themselves are newly drawn by this book’s graphic designer, Yuto Takamuro. This book also contains two texts: Taki’s own “The Language of a House,” one of the 19 essays published in Kishin Shinoyama’s 1975 book "Meaning of the House", and "The houses are all gone under the sea 'Anti-Architectural Photography' of Koji Taki” by cultural anthropologist Ryuta Imafuku.
・
Motifs: South House in Hanayama, 1968 / Suzusho House, 1968 / The Uncompleted House, 1970 / Shino House, 1970 / Cubic Forest, 1971 / Repeating Crevice, 1971 / Sea Stairway, 1971 / House in Kugahara, 1972 / House in Seijo, 1973 / Tanikawa House, 1974 / House in Uehara, 1976 / House in Daita, 1976 / White U, 1976 / House in Hanayama No.3, 1977 / House in Ashitaka, 1977 / House on a Curved Road, 1978 / Ginsha (Taki House), 1979. 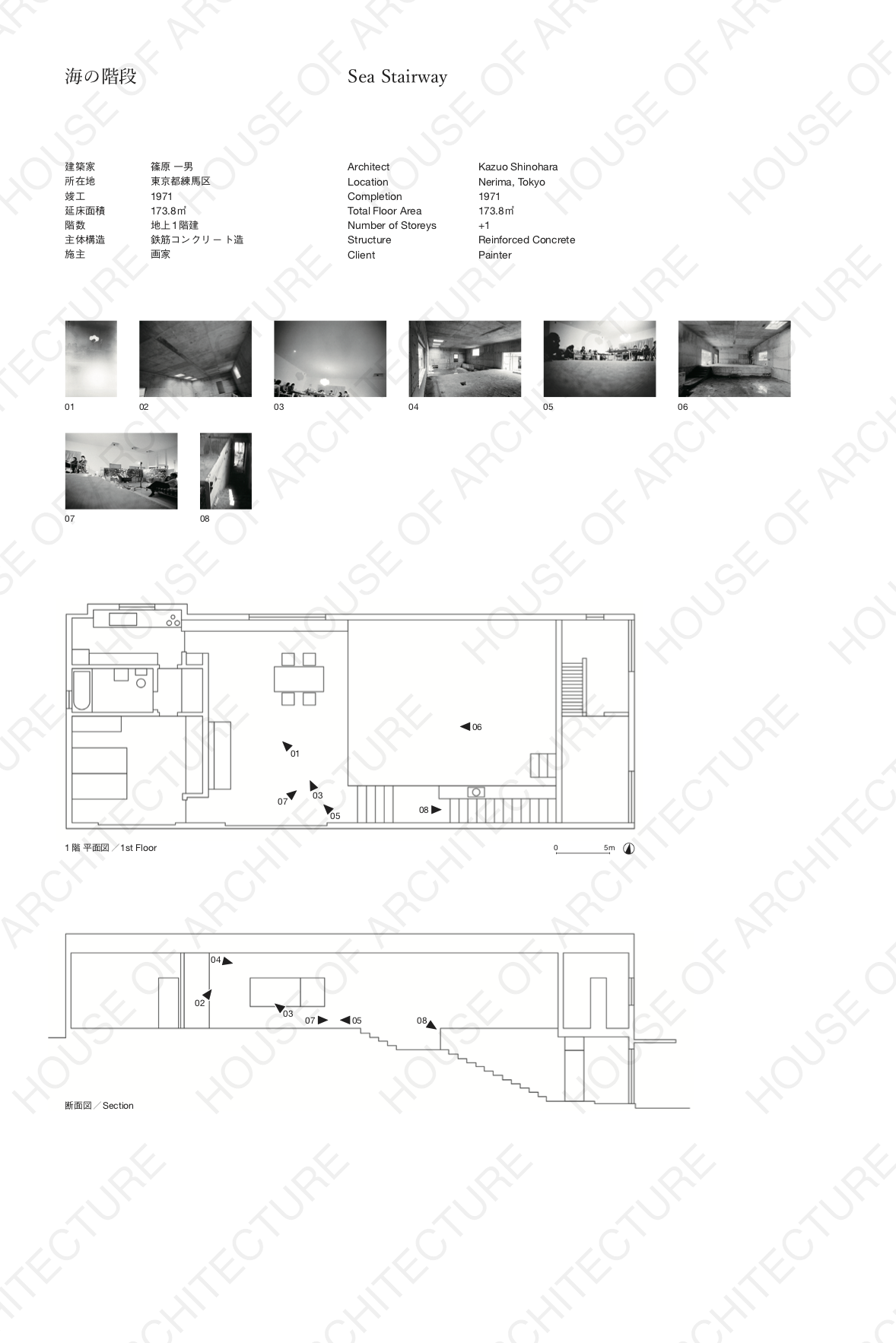 According to Ryuta Imafuku, this book collecting photographs that Taki had once left behind could be compared to the case of Franz Kafka, who famously entrusted Max Brod with burning his manuscripts. In his present essay that deals with Taki’s denial of his own photographic activity, Imafuku projects himself on to Walter Benjamin, who described Kafka’s will as a kind of "creative ‘extinction.’”

Regarding his father’s first photobook, Yosuke Taki writes: “I don’t necessarily think that he would be pleased to see these photographs published.” However, he added, “in the end history will be the judge.”

Koji Taki (1928-2011) — known as the publisher of the independent photo magazine "Provoke: Provocative Materials for Thought." Shortly after publishing the third and final issue of Provoke in 1969, Taki and his coterie co-authored the book "First, abandon the world of certainness: Thoughts on photography and language." With that, Taki ended his career as a photographer and shifted his focus on his discursive activities as a critic of art and architecture. From then on, he concentrated on his activity as a critic of art and architecture. This means that Taki’s architectural photographs are not "artworks", but rather a reference for his writings. They are also a fragment of Taki’s experiences and thoughts regarding the idea of the “lived house.” Indeed, Taki once wrote: “It is much easier to think about architecture with photography than it is to think about it in the midst of its relation to the problem of cities.”